When the U.S. General Services Administration (GSA) stated its intention to sunset the KKKA-1822 “Federal Specification for the Star-of-Life Ambulance” specification for the year 2013, there was immediate concern throughout the emergency medical services (EMS) community.

That KKK document, while never officially developed with the intent of being the national industry standard, dated back to the 1970s. In a relatively short period of time following the release of the document, various states accepted the GSA ambulance design specification in large part because of the absence of any other standard as well as their inability to develop specifications independently. It basically became the de facto national ambulance standard for the United States. Following that announcement by the GSA, the National Association of State EMS Officials (NASEMSO) board of directors convened to consider the industry ramifications of the potential sunsetting of the KKK document. In a November 2012 letter to the GSA, NASEMSO requested that the GSA consider a delay in the announced cancelation until late 2015. The additional time was “essential for the states to research alternative specifications, evaluate the impact on the nearly 19,500 local EMS agencies licensed by the states, initiate rulemaking processes, and execute the often time-consuming and expensive rule promulgation process.”

NASEMSO was quick to take action to develop a plan to support the state agencies with possible alternatives for their ambulance standard requirements. As its letter was being delivered to the GSA, NASEMSO was rapidly developing an industrywide multidisciplinary work group named the Model Rules for Ambulance Vehicle Design Project. The stated goal of this project was to “identify technically acceptable (ambulance standard) alternatives and to pursue industry partner consensus and feedback on the model regulatory language for state adoption related to the design of ambulances.” Coincidentally in 2012, the National Fire Protection Association (NFPA) was developing what would become its NFPA 1917, Standard for Automotive Ambulances, to be published the following year. In addition, the American Society of Testing and Materials (ASTM) had already published its “F2020 (2009) Standard Practice for Design, Construction, and Procurement of Emergency Medical Services Systems (EMSS) Ambulances.” Evaluating and considering both of these standards would become part of the NASEMSO Model Rules Project agenda as well as seeking other “technically acceptable alternatives.” 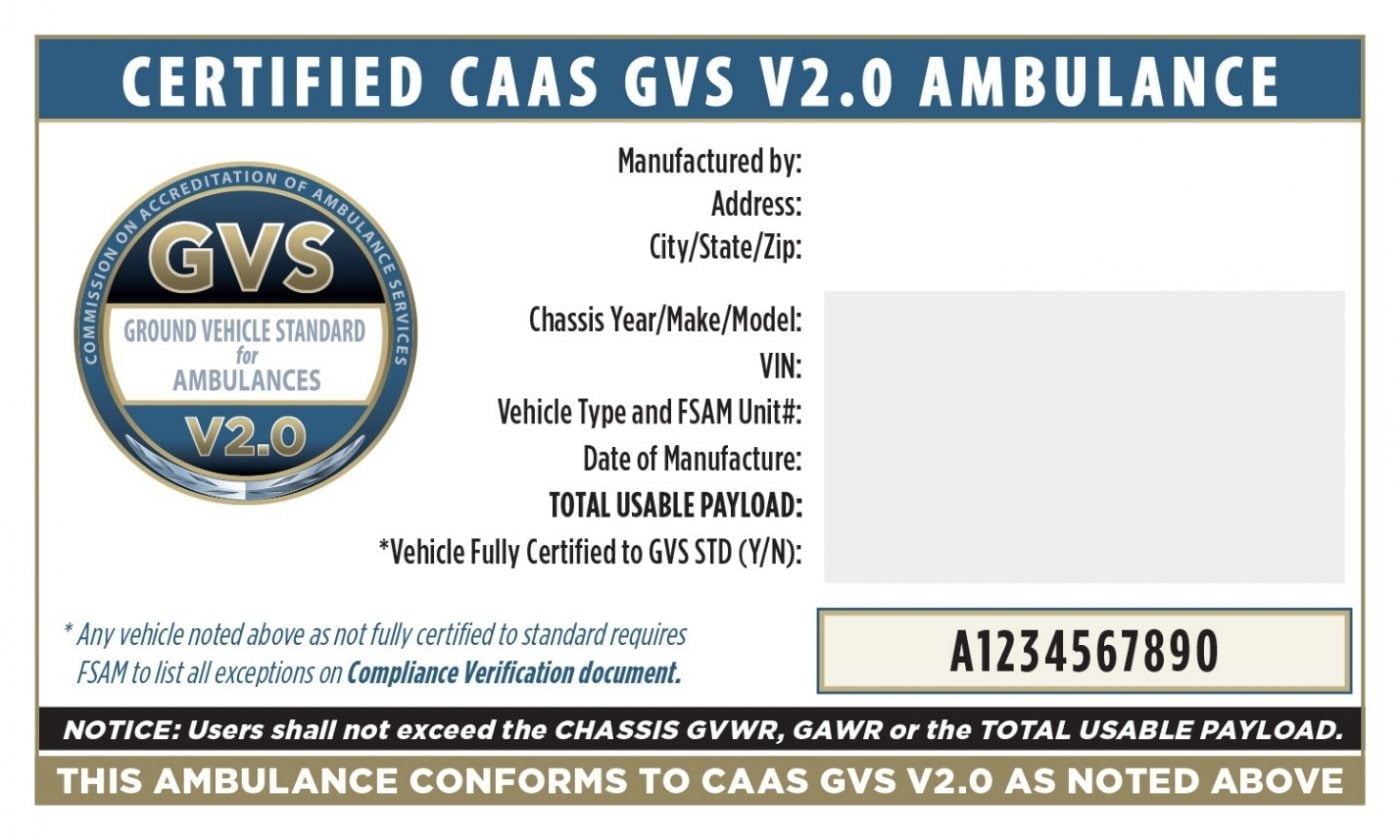 1 Ambulance manufacturers that are registered with CAAS-GVS are required to supply a vehicle label (shown) and informational documents that verify the CAAS-GVS certification and compliance of the vehicle to the standard.

The Commission on Accreditation of Ambulance Services (CAAS) was established to encourage and promote quality patient care in America’s medical transportation system. This independent commission established a comprehensive series of operating standards for the ambulance service industry. Accreditation of an EMS operation by the CAAS signifies that the service has met the “gold standard” determined by the ambulance industry to be essential in a modern EMS provider. CAAS did not have an ambulance vehicle standard when the NASEMSO Model Rules Project convened. However, it was soon contacted by a number of organizations and stakeholders asking that it consider creating a ground vehicle standard program. The request was clear: develop a comprehensive ambulance standard for the broad spectrum of EMS that could be accepted by state EMS agencies and utilized by both public and private providers nationwide. CAAS convened a strategic evaluation team to consider this project and agreed in 2013 that it was willing to develop an ambulance standard to meet the industry need and increasing demand. While new to the vehicle standard business, CAAS is an ANSI-accredited standards developer and was highly skilled at putting together a standards program.

CAAS invited a broad-based committee of leaders in the ambulance field to represent the stakeholders of the industry and function through a consensus process. This balanced standards development committee included EMS manufacturers, providers, manufacturers, federal partners, and safety experts, among others. The newly chartered Vehicle Standard Committee was charged with creating an industry consensus-based ground ambulance vehicle standard called the CAAS Ground Vehicle Standard (GVS). Consistent with CAAS protocol, a set of guiding principles was established and applied to the Ground Ambulance Vehicle Standard project as it was developed and maintained:

As the CAAS-GVS committee started its work, an early decision was made about the direction of the project. The objective was to develop a minimum standard for an ambulance and not a detailed purchase specification. It was clear that most providers were aware of the specific details they wanted included on their ambulance, but establishing high minimum and uniform standards in a variety of categories including safety, structural integrity, payload, performance, and scores of other criteria was imperative. The CAAS-GVS standard would be a minimum standard developed by the industry’s best subject matter experts (SMEs) that would serve as a comprehensive foundation for state regulation and individual purchasers’ vehicle specifications. It was clear to all that the GSA’s KKK document was a highly developed specification that had been regularly updated and was very effective. The CAAS-GVS committee agreed to implement most of the standards included in the most current version of KKK as a blueprint for the CAAS-GVS V1.0 standard. There was one more component for the initial CAAS-GVS draft. Testing standards for ambulance manufacturers have been developed and maintained by the Ambulance Manufacturer’s Division (AMD) for decades. These AMD standards (now named AMD Standardized Test Methods) are very technically detailed and establish minimum criteria for a variety of vehicle-related categories. All AMD Standardized Test Methods were also included in that starting blueprint for the CAAS-GVS.

As the CAAS-GVS Committee continued its standards development work, a critical federally funded ambulance safety project was preparing to release its first results. Specifically, ambulance crash testing that had been being performed by the National Institute for Occupational Safety and Health (NIOSH) was being completed. Those results were now ready to be published by the Society of Automotive Engineers (SAE) as SAE best practices for ambulance safety. Consistent with the CAAS-GVS guiding principle 1, those first published SAE ambulance safety standards were included as an essential part of CAAS-GVS.

After 18 months of development, the inaugural CAAS-GVS V1.0 edition was published with an effective date of July 1, 2016. This standard was created with the input and efforts of more than 100 EMS providers, regulators, manufacturers, and other SMEs as well as going through two very responsive industry public comment periods. 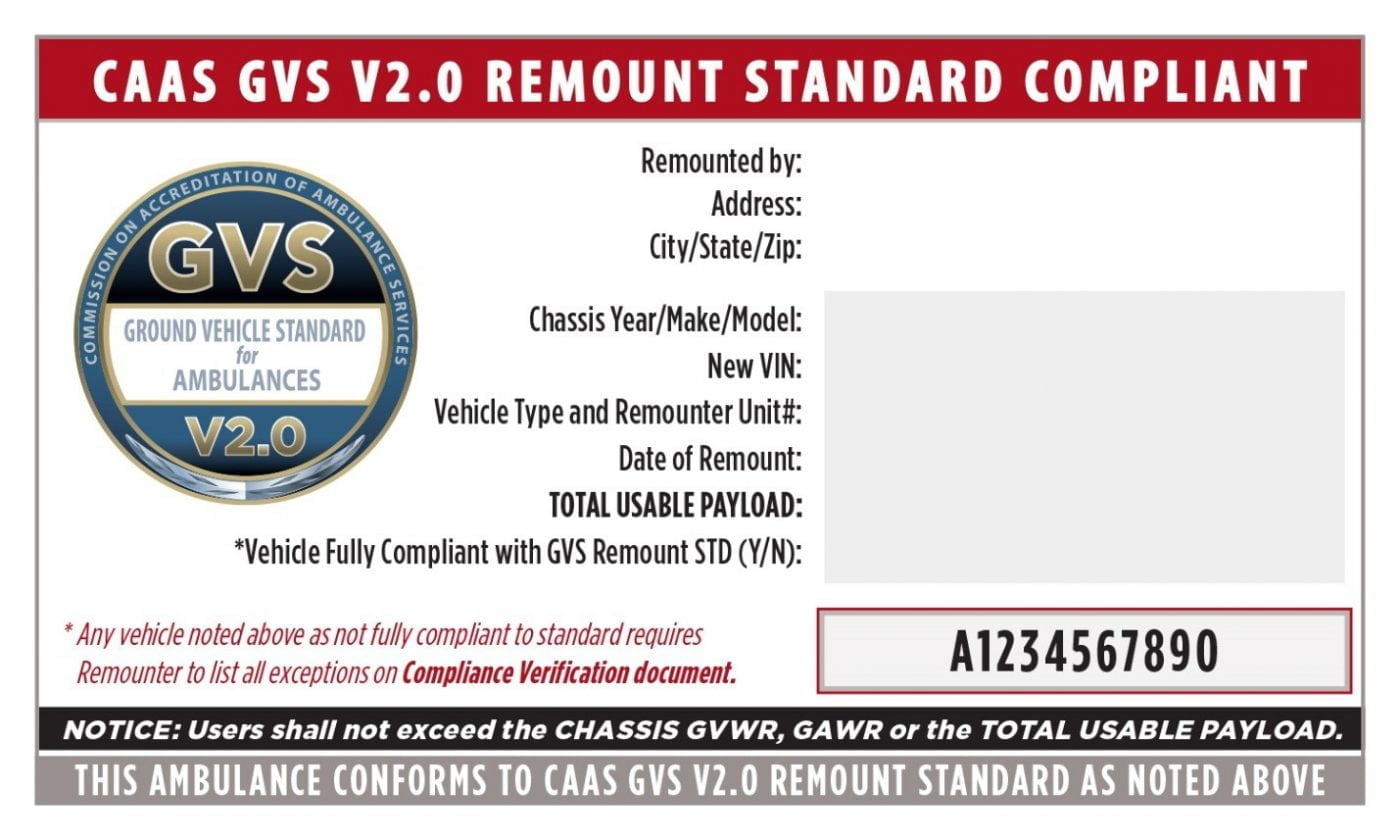 2 The remount compliance sticker and accompanying documents are coded in red and provide critical vehicle information. In addition to the technical contents of this new minimum standard, CAAS-GVS implemented a Final Stage Ambulance Manufacturer (FSAM) registration process and vehicle certification package program. Ambulance manufacturers that are registered with CAAS-GVS are required to supply a vehicle label and informational documents that verify the CAAS-GVS certification and compliance of the vehicle to the standard. Purchasers of CAAS-GVS-certified vehicles will have detailed information from the FSAM verifying that the builder has met the minimum requirements of the standard and have certified the vehicle accordingly, as well as some vehicle specific critical documentation. Nineteen FSAMs are currently registered with CAAS-GVS and authorized to certify vehicles to the standard.

As the GVS V1.0 project was finalizing, plans for the V2.0 version were being made. The CAAS-GVS is on a three-year revision cycle, and CAAS had two major objectives for the upcoming 2019 version. First, the document would include updates and edits from the prior edition. This would include some new minimum safety features as well as inclusion of the remainder of the NIOSH SAE ambulance safety standards that had been published after the release of CAAS-GVS V1.0. Second, CAAS had plans to include an ambulance remount standard as a component of the upcoming CAAS-GVS V2.0. This project would prove to be a challenging one, with a variety of specialized work groups to tackle this very specific topic. The project required including a different subset of SMEs who had specialized experience in this field and in many ways was more difficult than the new vehicle standard. This was because of the unique nature of the process and the number of “moving parts” that had to be considered (see “Remounts Defined: CAAS Releases National Standard for Ambulance Remounts,” Fire Apparatus & Emergency Equipment, November 2019). Prior to the CAAS-GVS remount standard, there were no industry criteria for remounters or remounted ambulances other than the federally required federal motorized vehicle safety standards. The new CAAS-GVS remount standard provides technical requirements and test criteria for remounts as well as some credentialing requirements for remounters. In addition, CAAS-GVS implemented a remounter registration process like that of its FSAM registration program as well as a remount vehicle compliance package. Note that compliance with the CAAS-GVS remount standard does not recertify a vehicle to a new vehicle standard but documents the fact that the vehicle has been remounted in compliance with the remount standard and meets all federal regulations. More than 31 remounters registered with CAAS-GVS in the first 60 days of the program. They include FSAMs, independent remounters, and providers that perform their own in-house remounting.

It has been quite a few years since that first word from the GSA of a KKK cancelation and the NASEMSO’s quick response. As 2019 ended, the KKK specification is still in effect and being regularly maintained by the GSA. In addition, both the CAAS-GVS and NFPA documents are active and have been adopted by many states. NASEMSO continues to participate in the development and maintenance of ambulance design standards by both CAAS and the NFPA and endorses the processes used by both organizations. When asked about the coexistence of these two standards, NASEMSO responded, “Due to the diversity of the EMS community with respect to provider type as well as the varied regulatory needs of states, NASEMSO supports the coexistence of both NFPA 1917 and CAAS GVS ambulance design standards and affirms our position that these two standards are not duplicative but rather complementary; therefore, the acceptance of both standards is in the best interest of state EMS offices and the EMS community.”

CAAS-GVS V2.0 is now published with an effective date of July 1, 2019. The CAAS-GVS team is already planning for V3.0, which is scheduled to start development in 2021 and be effective in 2022. An invitation will be made for anyone interested in participating in the project at that time. The CAAS-GVS standard and relevant information are available at no charge at www.groundvehiclestandard.org. Requests for information on CAAS-GVS can be made to Mark Van Arnam, administrator of the CAAS-GVS standard, at mva@groundvehiclestandard.org or info@groundvehiclestandard.org. MARK VAN ARNAM has been in the ambulance industry for more than 45 years. He is the founder and former CEO of AEV/American Emergency Vehicles. He serves as the administrator of the Ground Vehicle Standard developed by the Commission on Accreditation of Ambulance Services (CAAS-GVS).
2020-01-30
Previous: FDNY Awards Five Year Ambulance Contract for Wheeled Coach Ambulances
Next: Wheeled Coach Unveils New Voice-of-Customer Transit Van 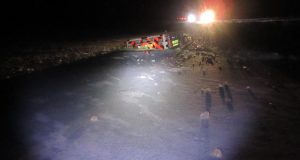