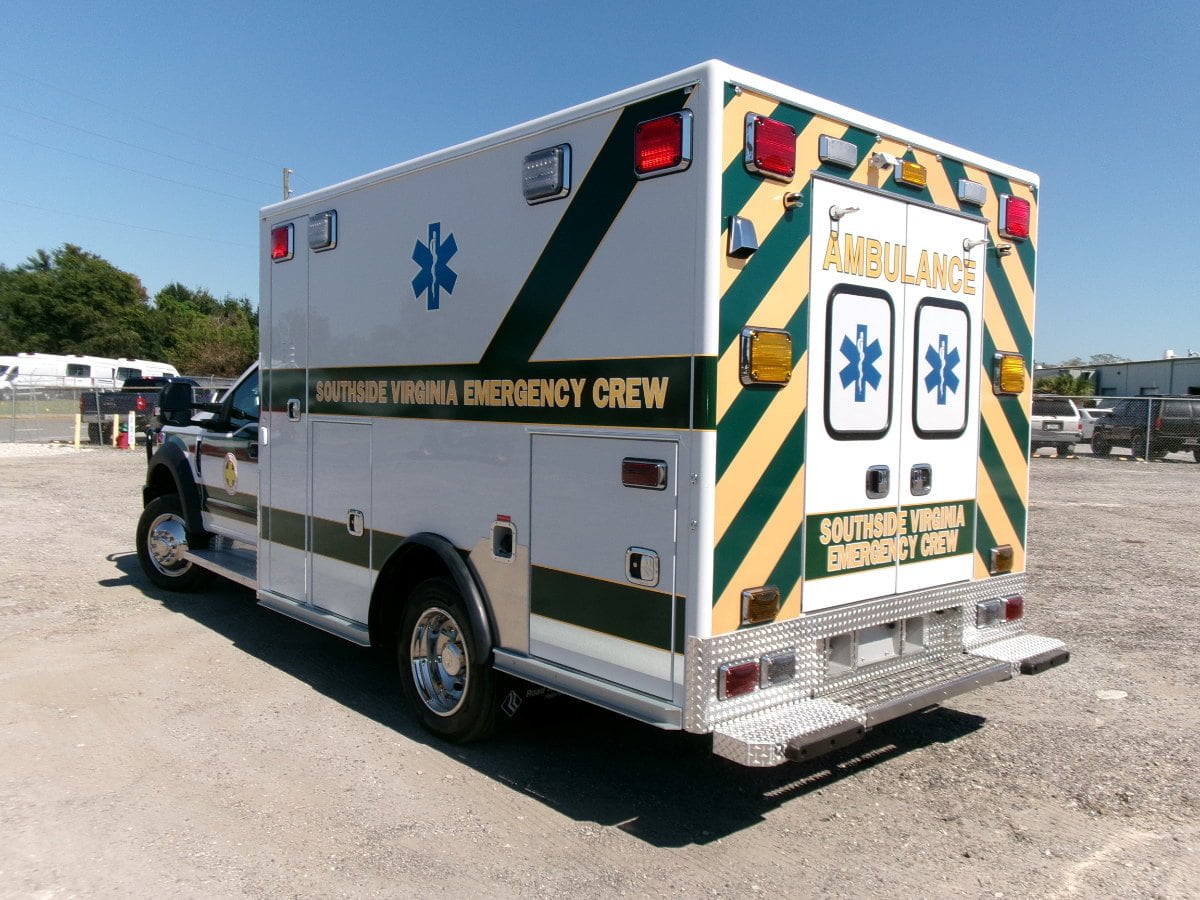 Southside Virginia Emergency Crew has a new rig in its fleet — a Road Rescue Type 1 Ultramedic ambulance built on a 2022 Ford F-450 4×2 chassis.

Holly Russell, Road Rescue’s outside brand manager, says the Type 1 is powered by a 7.3-liter gasoline engine, has a 169-inch wheelbase, and a patient module that’s 150-inches long, 96-inches wide, with 72-inches of headroom and a 46-inch wide aisle space. 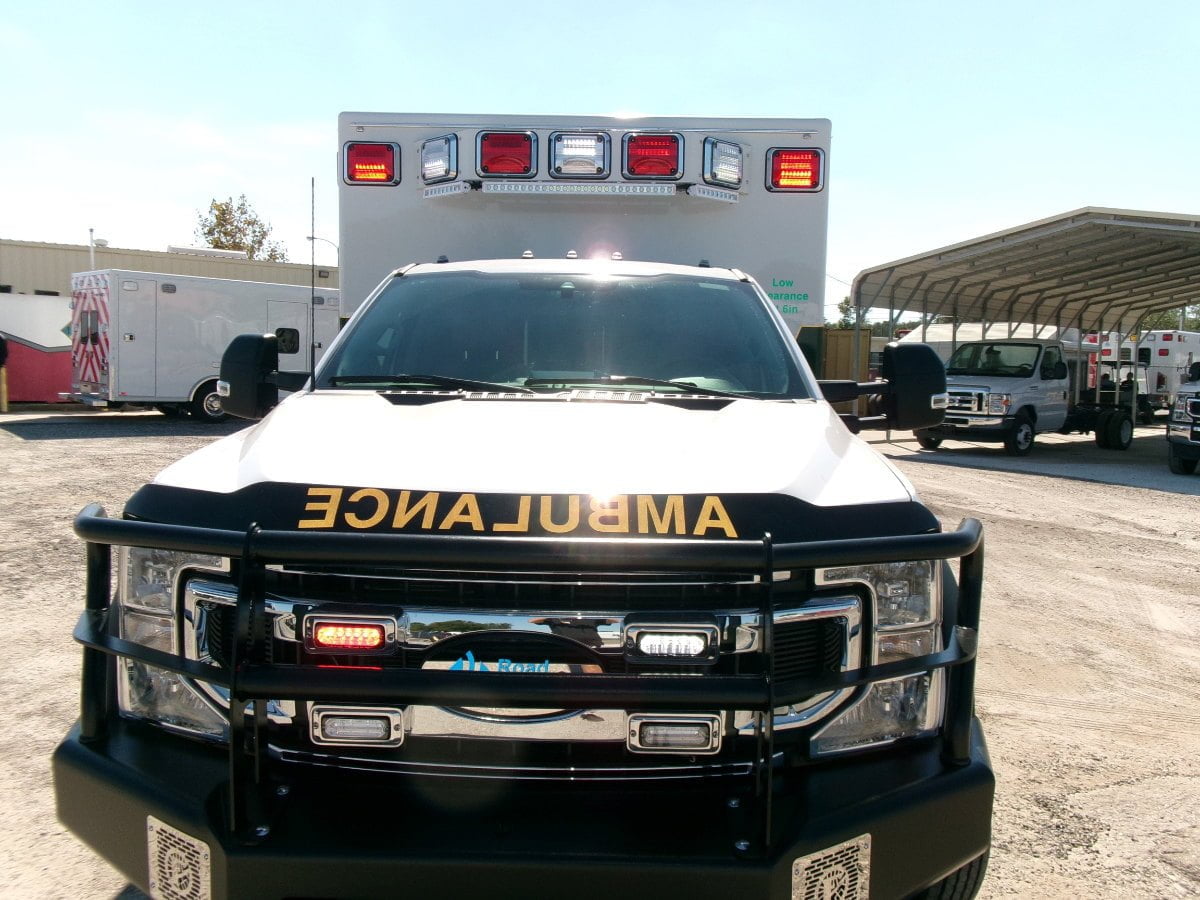 The Southside Ultramedic has a Cool Bar air conditioning unit that is faced with Whelen 900 series LED warning lights.

“This Ultramedic has a Liquid Spring rear suspension, a Buckstop Classic II bumper/brush guard, and drop skirts on both sides to make it easier to get in and out of the rig,” Russell points out. “It also has our Whisper Quiet sound dampening and thermal insulation which consists of five layers of insulation around the box and in the ceiling.” She adds that the ambulance has a .15-inch thick aluminum exterior skin, .09-inch thick aluminum interior skin, and Kydex anti-microbial thermoplastic interior. 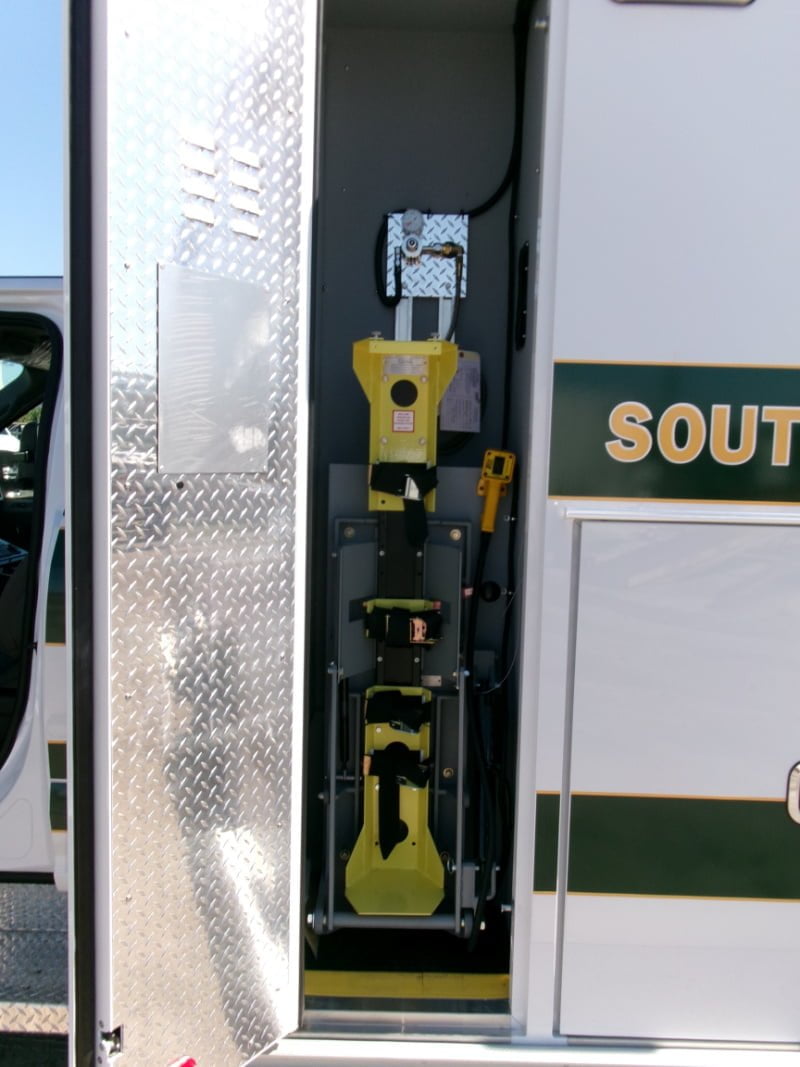 The patient module has all solid surface countertops and an inventory control system in all cabinets, while three of the cabinets have tamper seals, Russell points out. “There’s also a Mermaid Medi-Kool 747 climate control cabinet with a KitLock KL1000 lock in the ALS (advanced life support) area cabinet,” she says. 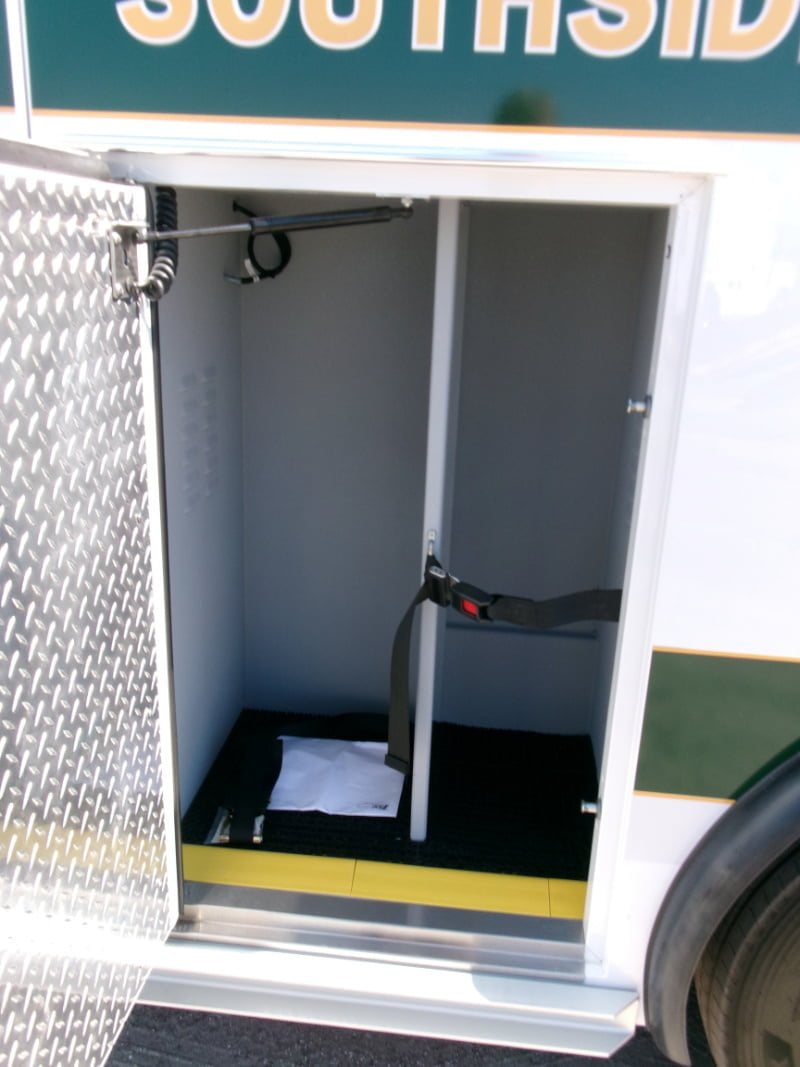 Compartment two on the street side is set up to carry a stair chair.

Seating in Southside’s new Road Rescue includes a CPR seat, attendant’s seat with a built-in child’s safety seat at the head of the cot, and two seats on the squad bench on the curb side wall. All seats are protected by Per4Max four-point seatbelt harnesses. 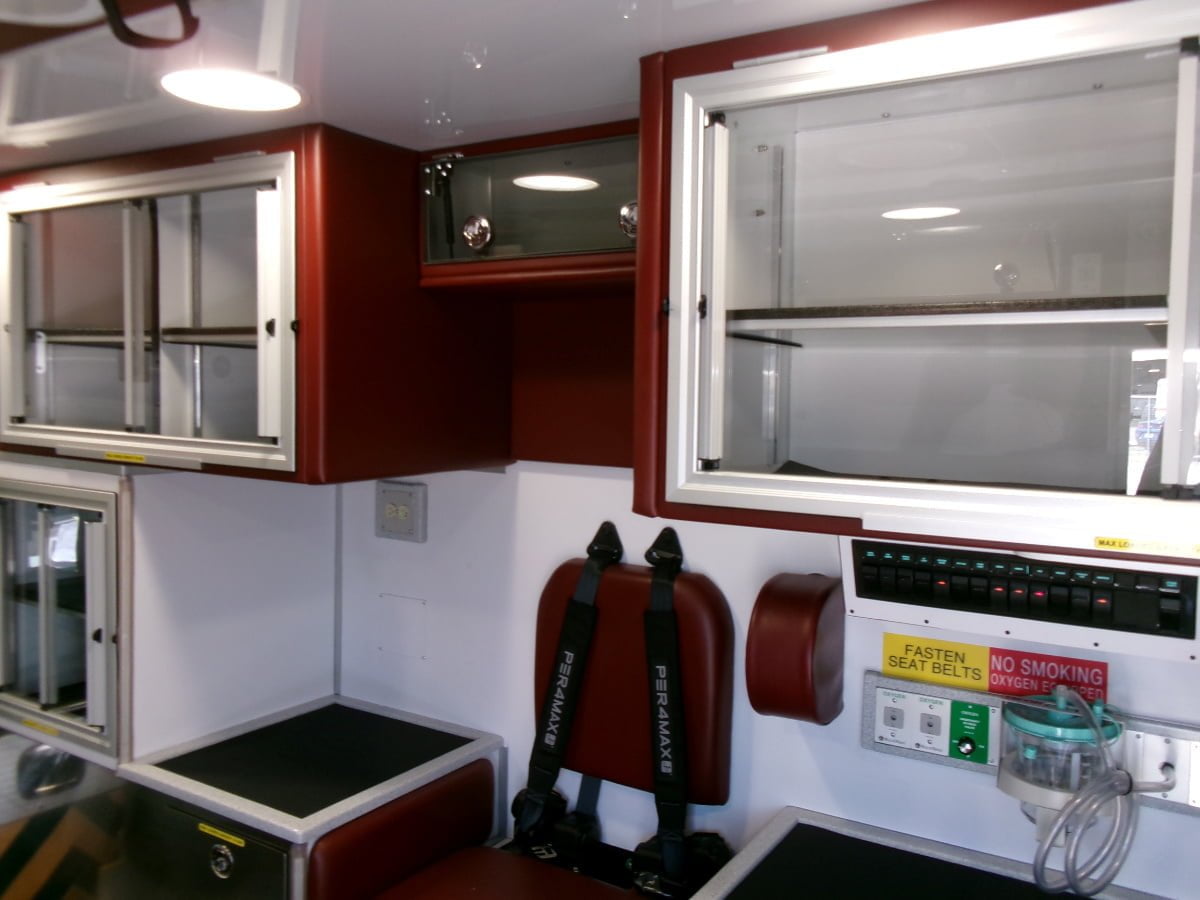 The street-side interior on the Ultramedic.

The action area on the street side wall has a medical device rail and two cabinets that share a single door with sliding polycarbonate doors and spring actuated latching handles with a restocking feature. Forward of the CPR seat is an additional action area with a tip-out waste container underneath. The interior of the patient module also has a ceiling medical device rail and anti-microbial grab handles at all door locations. All cabinets have LED strip lighting. 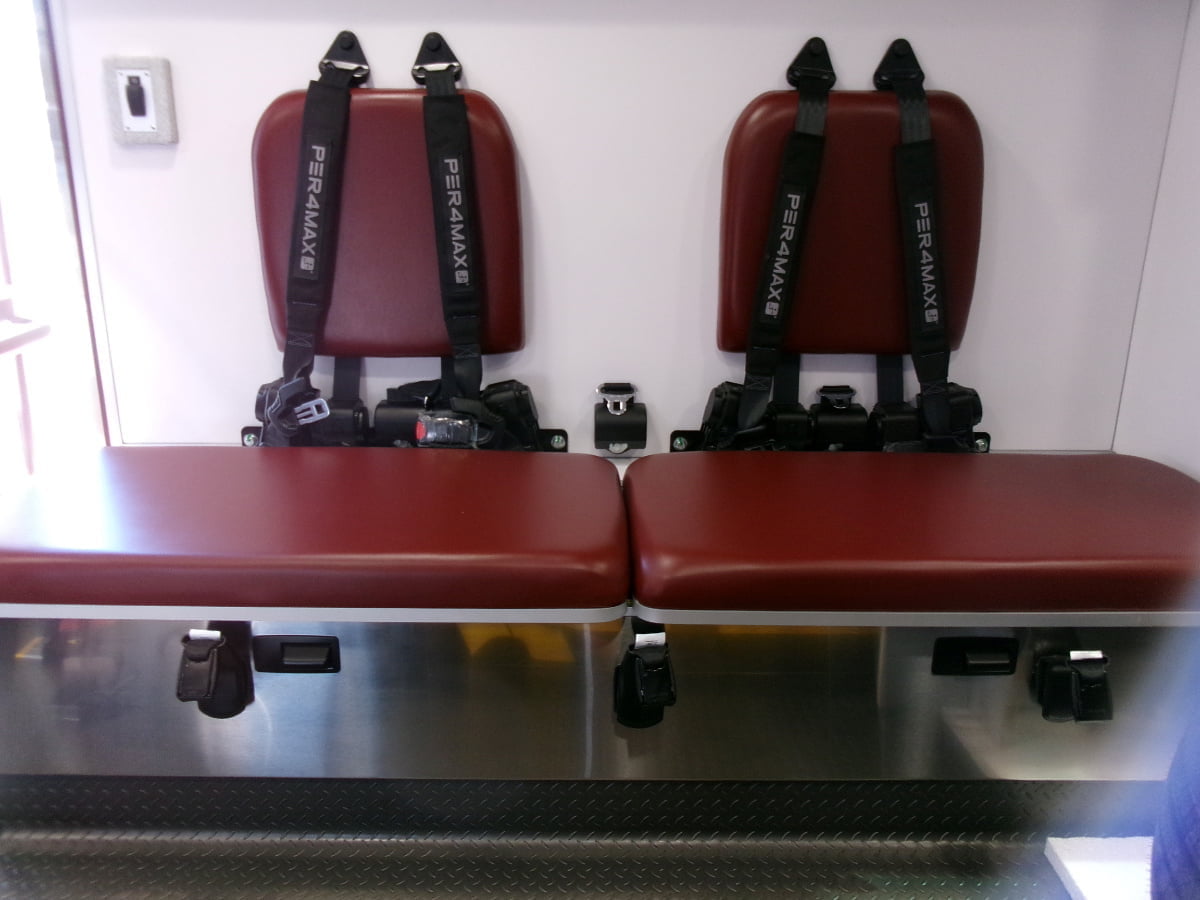 All of the Road Rescue’s seating positions are protected by Per4Max four-point seatbelt harnesses.

The street side exterior compartment one holds a Zico OTS electric oxygen bottle lift, while compartment two is set up to carry a stair chair. The rig has Fail Safe latches on its entry doors, and a privacy window on the curb side exit door. 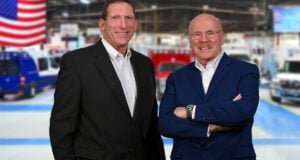 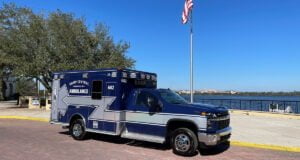 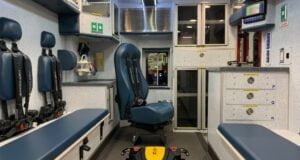 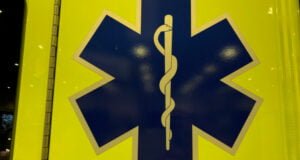 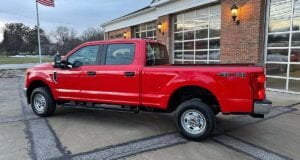 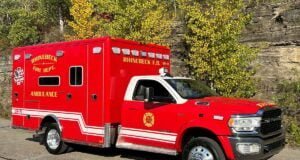